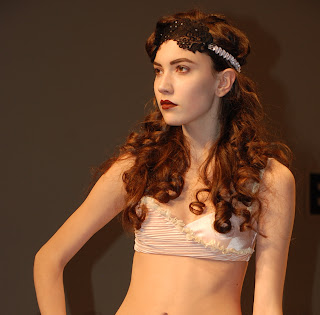 Who is Ashley Paige? Ashley Paige is a Los Angeles based swim wear designer and "it girl" who uses her name and recognition to raise money and bring attention to animal causes

How did you get involved with the show? Sharon Gault has been working with Ashley for years and has done every one of her shows and asked me if I would help her this season to design the look and oversee the enormous team of artists from multiple lines we assembled

How did you and she come up with the idea of collaborating different
lines on the show? She was at The Makeup Show Miami and met David from OCC and Tiffany from Anastasia. She asked David about airbrushing bodies for a show and asked him to design a custom lip color for Ashley's charity Ruffhouzen. She knew Anastasia's reputation for perfecting eyebrows and asked them to be involved with designing the brow for the show. Anastasia herself designed and oversaw her team.

How many collaborators worked on the show? We had artists from The Powder Group and Four different cosmetic lines sponsors including Anastasia, Obsessive Compulsive, Smashbox and Sephora Pro team...We also had freelancers from Nars and Make Up For Ever to bring across the specific look of the show.

What was the inspiration for the makeup design? Isadora Duncan and the glamour of the 1920's with a doomed romantic feel.

What did you like most about working with such a diverse team? Everything. I love the community and collaboration that happens during fashion week and Sharon was eager to assemble this collection of cosmetic lines. It was amazing to see executives and artsists and owners from such varied lines working side by side on a model.

What was the coolest thing about working on the show
I have to say working with Anastasia was exciting for me. She is a legend and one of the most warm and humble women you will ever meet. Her team and all of the other artsist worked so hard. Also working side by side with Lori Taylor from Smashbox. She oversees every show at Smashbox studios for LA fashion week and never stops running but she makes every designer and evry artist at the show feel liek they are the only person there.

What products were key items in the show? Smashbox Bionic Mascara gave the lush lash effect. Anastasia brow pencils and powders gave the period feel to the face. OCC Ashen gave the face and bodies the beautiful, haunting effect and the chocolate brown lip was custom designed by Sharon for the show.

Can you give me one word to describe the experience of working on the show? Definitely, it would be Community.

You can meet James and Sharon Gault both at The Makeup Show NYC - May 18 and 19. Sharon will be presenting our closing Keynote talk. James will be presenting a special hands-on session of Understanding Hi-Def. www.themakeupshow.com
Posted by The Powder Group No comments:
Newer Posts Older Posts Home
Subscribe to: Posts (Atom)